The project consists of six basketball courts, including painted-on court striping, an adjacent approach ramp, and basketball pole and hoop structures. Based upon a number of indicators, the play courts were apparently cast in three or four principal, separate placements, in counter-clockwise fashion with the north-east first, north-west second and southern section last, in one or two placements. The perimeter of each concrete placement is distinguishable by the style of jo
26 views0 comments 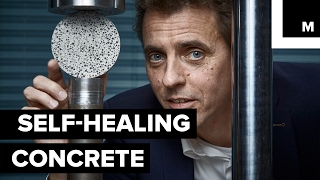 Building Forensics International Concrete Consulting Firm is always looking for new and innovative in roads to the world of concrete. The video and attached article explains new 'self healing' concrete. Please see the article entitled: 'Bioconcrete' of the Future Can Heal Itself . Dutch microbiologists, Hendrik Jonkers and Erik Schlangen of Delft University of Technology have devised a way to use bacteria along with a food source formatting them in a way that allows concrete
6 views0 comments

During the course of a workday many articles and links are sent to give information with what is happening in the concrete defect industry. At Building Forensics International articles like Cracks at Nuclear Site Spur Violation communicate valuable information regarding ASR alkali-silica-reaction and how it affects concrete and the way concrete defect investigations are handled. BFI has been involved in hundreds of ASR related projects where investigations were performed. I
17 views0 comments

Concrete that can last more than the average 50 to 100 years is being developed by Shimizu Construction out of Japan. please take the time to read the article found on the the bfiblog.com site. (click here to read article) This could have a major impact with concrete damage, concrete defect and ultimately concrete failure. This new concrete mix design technology has a positive effect on the strength and curing process of concrete. At Building Forensics International we inv
2 views0 comments

Concrete and Earthquakes: A Whole Lot of Shaking Going On!

Lately in Southern California there has been a whole lot of shaking going on. Talk of increased seismic activity. I'm talking earthquakes! 5 point this and 6 point that. Earthquakes! So being involved in the concrete industry all this talk of earthquakes has piqued my interest. I ran across an article written by H. McWilliams, and C. T. Griffin from the Department of Architectue, Portland State University. The title of the article i I encourage you to re-read that sentenc
0 views0 comments

I read an article this morning "Employers Call to Withdraw Silica Rule". This article updates where the construction industry and the government are with the proposed rule on Occupational Exposure to Respirable Crystalline Silica. Not to make light of this topic, but it seems like a lot of "dust in the wind". What I mean by that is the article points out that the "measure is significantly flawed" and this writer agrees. The key issue from this writer's view is the statisti
6 views0 comments

Partnering Together In Concrete Disputes

Building Forensics International is a consulting firm that helps clients manage disputes that involve Concrete and Cement issues. When a developer, contractor or sub-contractor is approached by one of their clients regarding workmanship issues of any kind that involve concrete, cement, or any other related materials, BFI works to find reason(s) for the defect, damage or workmanship issue in question. BFI is a service oriented company, striving to produce the best quality pro
6 views0 comments